Subject:   Re your phone call

I got your phone message and would be glad to set up a time to talk. I think it would be good to include my co-founder, Greg Lloyd in the conversation. Let's plan a time next week when we can talk. What's your schedule like?

Rod Welch left me a voicemail the other night, curious about Traction. I'm sending him a reply suggesting that it would be good to talk with both Greg and I. Here's the current thread... 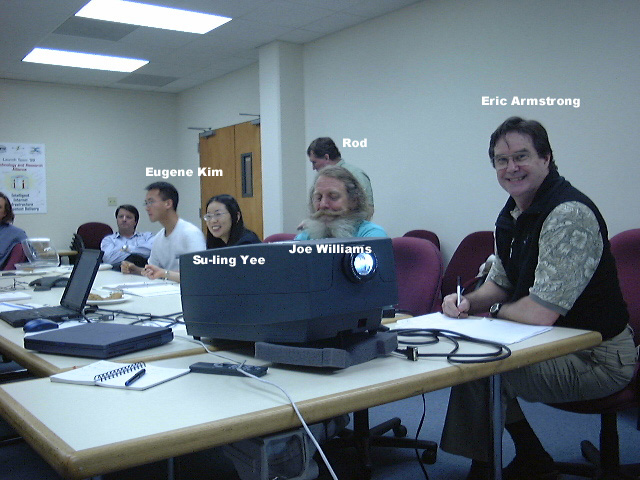 I have no idea where it can be found at this point. There is a pointer to it somewhere in the archive. I may have captured it in the links-page I kept re-posting long ago, but I'm not sure.

Black Belt testing is in a couple of weeks, on Friday, Nov 16th. The news cameras will probably be there, so you may catch highlights on the late-night news.

The Traction interface was great with respect to categories. The were hierachical, you could change them, and it kept an audit trail of changes.

However, the software was never made available, as far as I know. Their comment with regard to open sourcing it was that, if they did, it would "constitute the greatest act of charity in the history of software development". That's a bit of an overstatement, I'm sure, but I understand the feeling.

Personally, I think that the information on the web is free, but you still buy a computer so you can access it. So even if knowledge is available for use, I see no harm in people purchasing the platform with which to avail themselves of it.

On the contrary, I see that the opportunity to make money by providing better access and production mechansims can only contribute to the spread of the technology, and hasten the development of a knowledge-interchange standard.

(The way I see things, some knowledge will still be secure. So the intelligence community would let knowledge in, but not let knowledge leak out. Similary for various other sensitive communitites.)

Or we can insist on open source. So far, that has been our choice. Two years later, I don't see that we have gotten very much further down the road as a result of that choice. Nevertheless, it remains our choice.

First, what's the story on your black belt event? Are we going to see you in the Olympics in 2004?

In your letter on September 25, 2001 see below, you say Traction had the right interface for assigning and displaying categories, plus mechanisms for audit trails and other important functions. This aligns with Traction's presentation at SRI on April 13, 2000, where the representative, Chris, demonstrated these features.

If memory serves, we heard that the staff uses the program for daily work designing, producing and marketing Traction, however, Chris explained there wasn't enough time during the meeting at SRI to show any work product.

Later on April 14, 2000 I believe a letter came over the transom from you recommending the OHS/DKR team use Traction because it is the "closest thing to a complete OHS with hints of DKR-ness."

Is there any work product showing this capability, for example to assign categories, follow an audit trail on something? We got a few letters from Chris following up the demonstration at SRI, but there were no links to work product.

Yesterday, Eugene provided a location to see work on dialog maps, which you described in a letter on 010916. That shows how organizational memory is used to carry on the work of the OHS Launch Community. Is there a web site for Traction that shows how the meeting on 000413 was handled, or how Traction organized an email, or did work on XML, or on developing the category features you describe?

From From http://groups.yahoo.com, see original source.

[The following listed items open a login screen to Traction resources at this location....

[Appears that above may be a summary listing of following Traction resources... ]

Doug Engelbart posted a brief note on his meeting with cjn (Traction10552: Traction for the Bootstrap Alliance! ) to the Unfinished Revolution II eGroup. Several members visited our public home page, and Eric Armstrong published a thoughtful response, quoted below. This also led to a Traction evaluation request from Terry Yelmene via Denham Grey (Traction10617: Traction and BackLand ). Cjn will try to meet with them on 12 April.

I read and will post references to several very good and relevent threads in the eGroup (a painful process!). For starters, see Unrev II- Message 26 "Towards a DKR" by Eric Armstrong, Tue 18 Jan 2000. Eric's home page is www.treelight.com. Sign up for the eGroup yourself!


I was visited last Tuesday by Christopher Nuzum whom I had met at an MIT symposium (50th annivrsary of Vannevar Bush's famous publication, As We May Think) -- Chris was a product of the Brown University, Andy van Dam hypertext program.

He demonstrated the Traction System; quite impressive. Calls it a "journaling system" for keeping track of many tpes of ongoing events, thoughts, interactions, etc. Something we should learn about; functions that should be a part of everbody's future DKR workshop.

He plans to visit our area between 9 and 15 April; Offers to present/discuss with any of our group -- or, could be at our Wed 12-Apr meeting.


Colloquium at Stanford
The Unfinished Revolution

I look forward to hearing more about this. It does look interesting.

Here is one tidbit from their site:

With Traction, you can flag paragraphs of the same entry with tags like suggestion, contact, competition and todo. With the interactive form, it's as easy as adding a color-coded Post-ItTM flag to a paper document.

This ability to "categorize" information nodes is fundamental to anything we want to do.

This is my summary of the meeting I had with Doug Englebart last Thursday, on the subject of OHS design.

Had we done the use case analysis, I would like to think that system requirements like "see reply in context", "ability to ignore threads" and "better searches" would have come out. For the use cases we did examine, the need for categories did appear, but is not addressed in reasonable fashion in this proposal, imo.

When we built StreamLine, I was fortunate to have two strong developers who convinced me to let my preconceived notions go and let the analysis take the system where it wanted to go, rather than forcing down the path I had chosen. I wish we could do the same with the OHS. I believe it would make a difference.

Hi All, FYI the following comprises the attendees for last week's meeting at SRI:

[Editors note: there is a big list of people who received this letter that is omitted in this record.]

The group I presented Traction to is the one behind Doug's current Open Hyperdocument System / Dynamic Knowlege Repository initiative. Their goal is to evolve an open-source OHS/DKR system. They loved Traction. After I presented, the discussion turned to open source business models. They said that Traction was the best platform they had seen so far. The group decided that in order to get source access, they should buy Twisted Systems. Or to get one of their partners like IBM or Sun to do so.

Here are the people who attended:

Eric is familiar from the eGroups discussion. Joe is a self-described marketing guy (see marketing guy (see http://www.hypermultimedia.com/). Rod comes from the construction industry. Su-ling has a background in East-West Psychology; she's working with Doug. Eugene is writing a book on the history of free software. 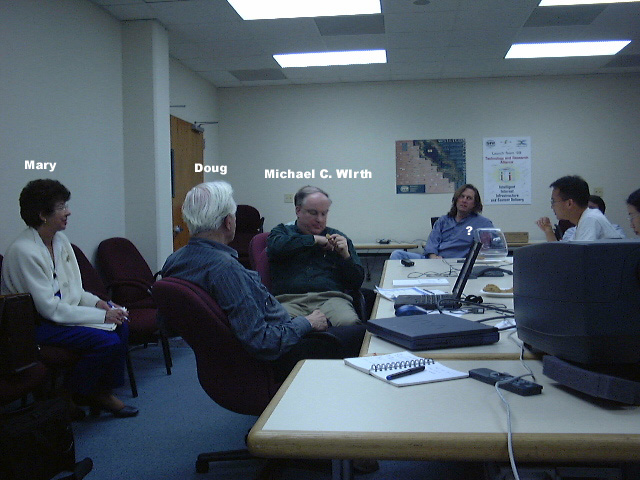 Mary is Doug's assistant. Michael is a researcher at IBM Almaden Research Center. They built WBI, IBM's Web Based Intermediary system (www.almaden.ibm.com/cs/wbi), on which Doug is looking at building an OHD/DKR. He suggested we look into their Clever clustering technology, www.almaden.ibm.com/cs/k53/clever.html ).

The guy with the ? has something to do with computers at Stanford. Also attending was a guy named Lee, an AI researcher at Stanford involved in geographical systems and someone from Software Carpentry, an open-source company along similar lines to BeOpen which does work for Los Alamos National Labs.

Doug spent about an hour and a quarter reviewing relevant aspects of NLS' architecture. Then the Software Carpentry guy presented, talking about sociological factors in open source development.

Then I demo'd Traction. I think they were pretty impressed. Eric and Michael asked about the tag space -- Michael asserted that what you really want is a bag, not just a hierarchy. Doug is really enthusiastic about Traction. But they are looking for an open-source system they can extend, and it's not clear how to reconcile that with our objectives.

After the meeting, we went for pizza. I told Doug how much I wished the rest of Twisted Systems could be there, how much his enthusiasm would be appreciated. He said, "bring them next time!" 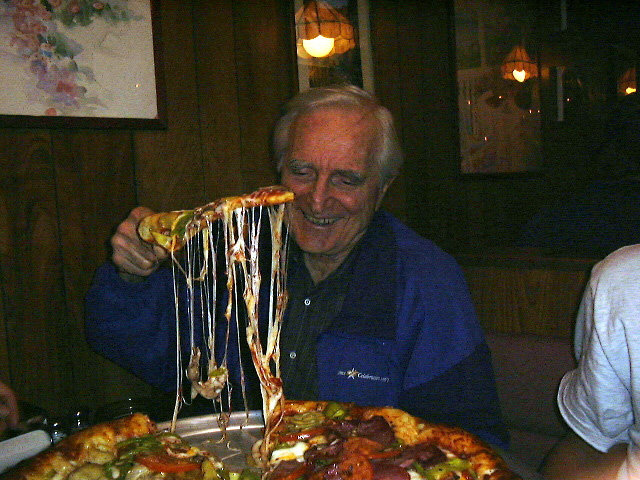 Chris -- Many of the discussion topics in the Unrev II eGroup are very articulate and relevant to our work with Traction (see Traction10676: Dynamic Knowledge Repository - and Traction ). If your have time, please read (at least) these threads to get a flavor of the questions and items of interest for your talk and demonstration.

I'll clean this up a bit later - or you may add comments, links or suggestions. 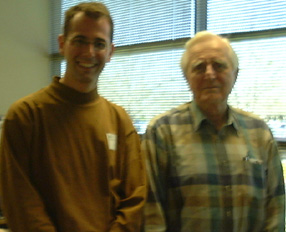 Photo of Chris and Doug Engelbart

I met with Doug Engelbart for two hours yesterday, during which I gave him a thorough demonstration of Traction. Doug summarized, "Well this is fortuitous, I like this. I liked it, except it leaves me stimulated."

We talked extensively in the beginning about the versioning/updating model. Doug was most concerned with how we maintain stable references to an intermediate state of an entry which has been updated, and also about tagging large documents instead of many small ones.

One of his major objectives is to find a system which makes it easier to understand and compare the advantages and disadvantages of systems like Traction, at a very deep level, in order to guide the development of future systems and the choice of future prototype Dynamic Knowlege Repositories.

I told him how much we got out of his papers, and he was glad; he said that, "you'd think that nobody ever read them." See Traction5713.013: Of Mouse and Man , Traction568: The CODIAK Process Supported by an OHS [DCE]

Here's a photo from my last visit. It shows me & Doug Engelbart and the Traction login screen, at Doug's house. Unfortunately, lots of really good (digital) photos didn't come out due to a failing SmartMedia card. 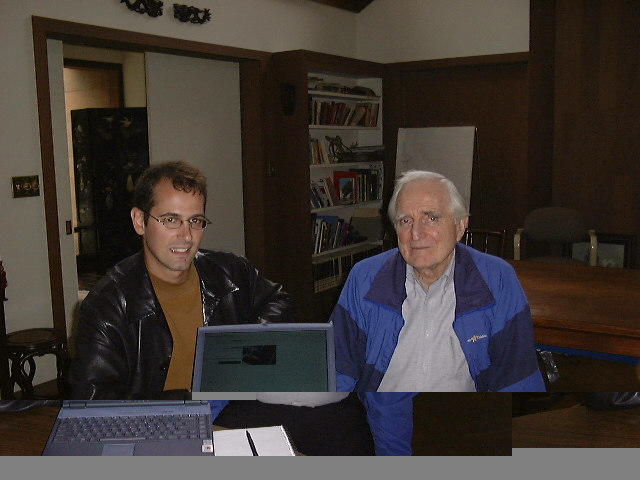